How to start from seeds for a garden

Now that I have a spacious backyard I feel like I can experiment with growing my own vegetables.  It’s something I’ve always wanted to do and what better time than now?  I started by purchasing some heirloom seeds; I bought tomato, red bell peppers, zucchini, carrots, onion, basil, rosemary, spinach, lettuce and a few other things from Baker Creek. 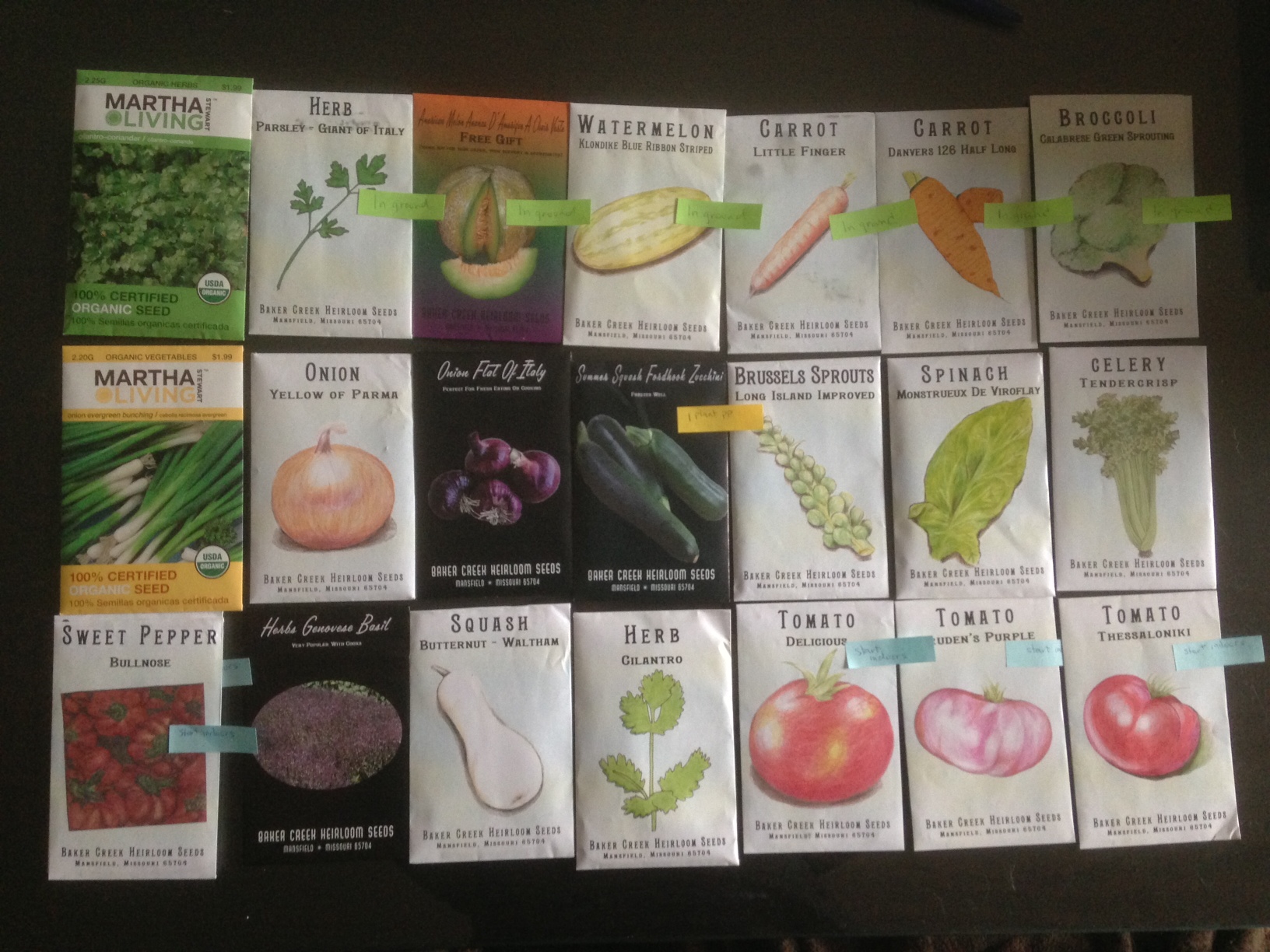 I read the labels or researched what time of year each should be planted and if they could be started indoors and then labeled each with a post-it note.  The blue ones should be planted in advance while the green ones do better if planted in the ground.  I learned that some plants, like broccoli and carrots do not like to be transplanted – disturbing the root system can cause the plant to die or not produce any fruit.  With that said, I did plant some broccoli indoors because with this being my first year gardening, I wanted to experiment.

I purchased a Burpee seed starting tray and followed the directions: place a little dirt pod in each compartment and fill with water so that each one expands and then place seeds.  First time around, I placed 3-5 seeds in each compartment but when it came time to transplant, I felt that the seedlings would have been better off if I only had one per so the second time around, that’s what I did.  The next step was to soak a foam pad with water and place it below the tray and in a large rectangular pan of water.  I liked this setup because I felt like the dirt was always pretty moist, so I would use this tray again next time around. 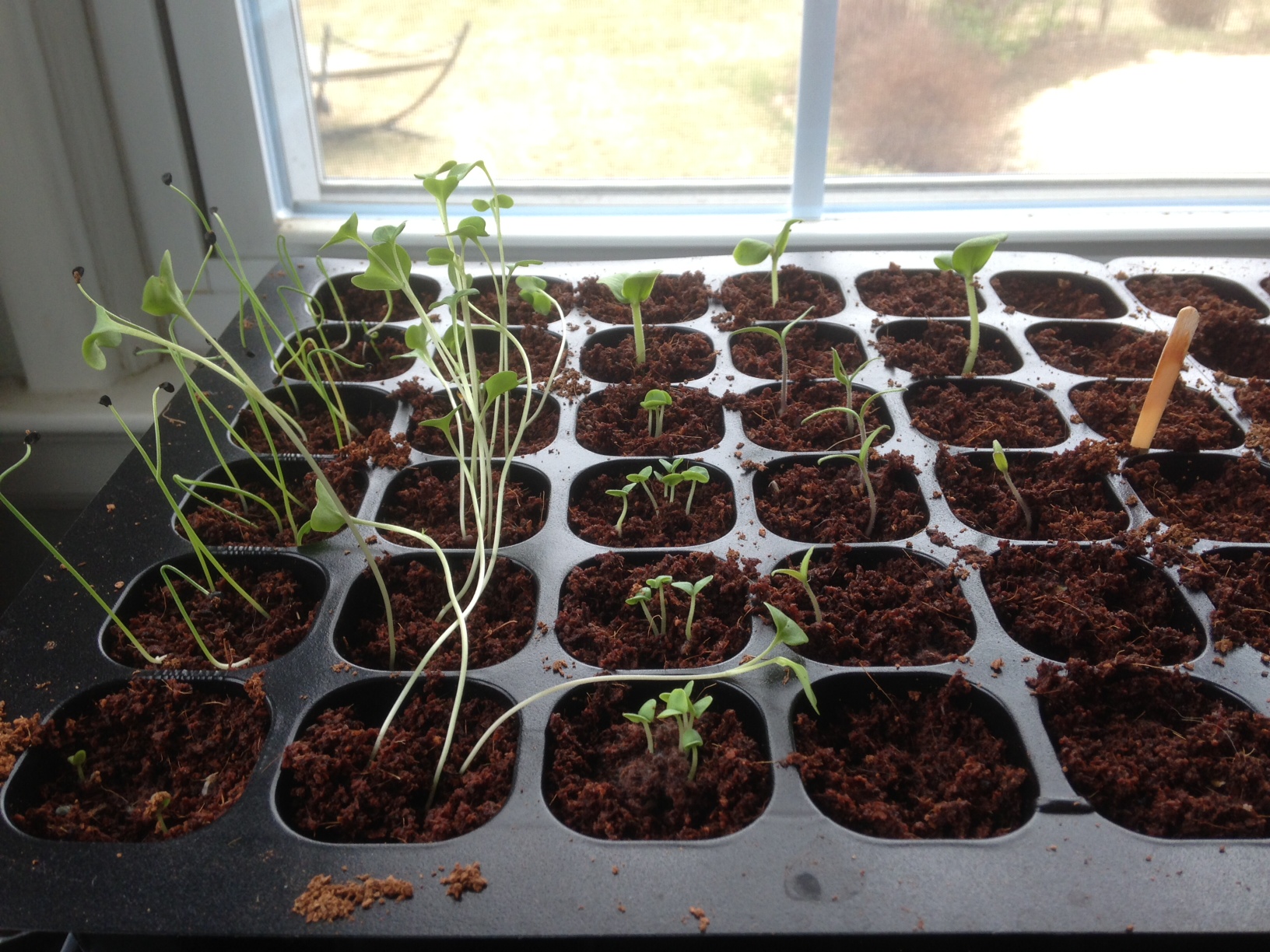 My seedlings grew pretty quickly and the leggy broccoli showed me the importance of making sure they had enough light.  I initially had my seedlings in what I thought was a southern facing window but was actually South East, so I moved them to a better location and positioned them up higher so they were right at the base of the window sill. Once the seedlings had two full sets of leaves, I transplanted them to small clay pots using organic potting soil. 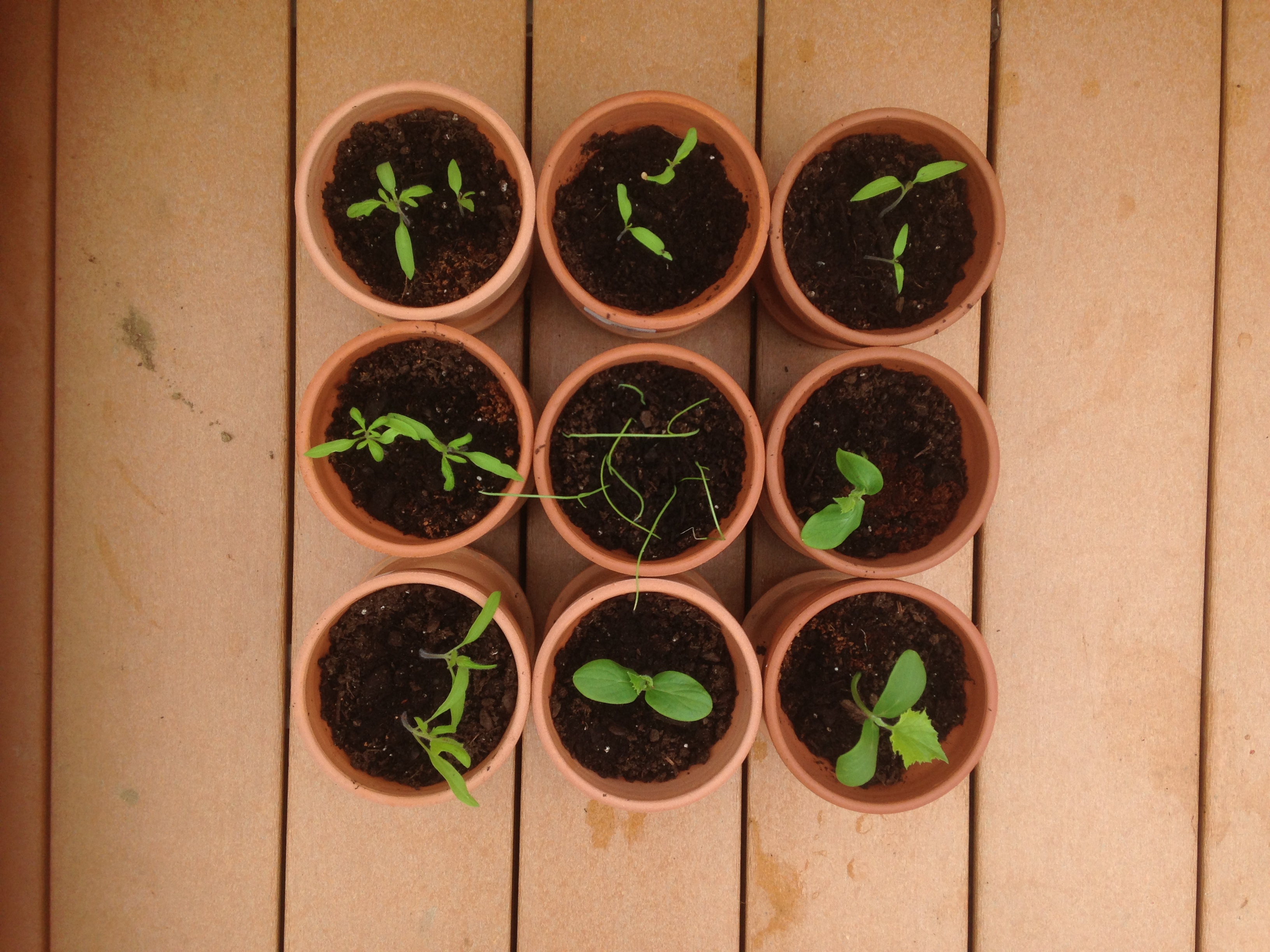 At this point the weather was pretty fair around 55/60 during the day and 40 at night, so I would bring them out during the day and bring them in the house at night.  Tomato plants do not like the temperature to be below around 45/50 degrees and some nights I would notice the leaves pointing straight up and I imagined the poor thing was shivering! The days following the transplant I noticed some of the leaves of the zucchini would turn a bit yellow or the tips of the leaves would get a little dry, but they all grew out of this… I’m not sure if it was transplant shock or the strength of the sun.  I had to monitor them pretty closely to make sure the soil didn’t dry out too much.  Bringing the plants outside and inside the house everyday was a little daunting so I might try to figure out a better solution next year.

I allowed the plants to grow this way until the roots started to show a little through the drain hole at the bottom of the pot then I carefully transplanted the seedlings into the garden. In general, I wish I had started the process much sooner than I did.

Another thing I learned is not to use popsicle sticks to label seeds in the seed starting kit.  The moisture from under the plastic cover destroyed the lettering on the sticks and caused the wood to mold a little.  This made it difficult for me to tell which variety of tomato plants from one another.  I couldn’t tell the cucumber seedlings apart from the zucchini.  I confused parsley with cilantro and at one point thought both were carrots :]